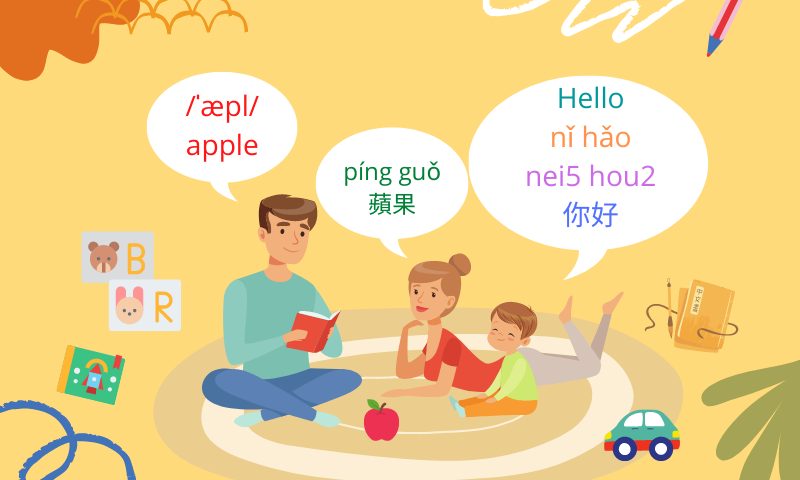 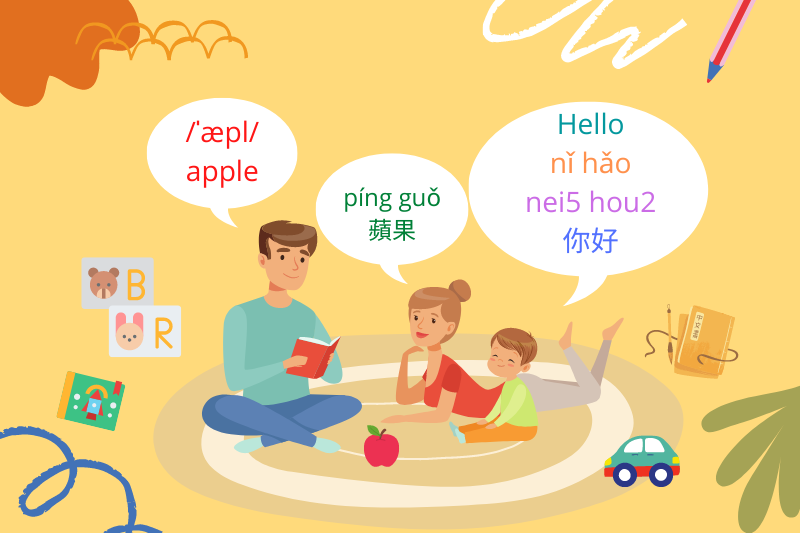 The most widely spoken language in Hong Kong is Cantonese. With the colonial background and the handover in 1997, English and Mandarin are also adopted as official languages. The vision and language education policy of the HKSAR Government is to nurture children to be biliterate and trilingual. Many parents strongly believe that it is important to let their children learn a second and even a third language as early as possible so that the children can get a head start and be more competitive when applying for prestigious kindergartens and schools. It is not uncommon to see local parents speak both Chinese and English to their toddlers and send them to English-speaking playgroups for additional experience in English. But can toddlers learn several languages at the same time through interacting with caretakers at home? What is the role of caretakers and their language input if they want their children to develop trilingual proficiency in Cantonese, Mandarin and English?

At present, very little is known about fine-grained properties of trilingual caretaker input and their impact on different areas of trilingual development in toddlers. Even less is known about whether or how toddlers in Hong Kong are able to develop Cantonese-Mandarin-English trilingual proficiency just by interacting with their caretakers in the three languages at home. The few existing studies on early trilingual development almost exclusively observed children growing up in monolingual communities like the UK and the US. To fill the research gap, Dr Maggie MAI Ziyin, Assistant Professor of CityU’s Department of Linguistics and Translation conducted a longitudinal case study tracking the caretaker input and the trilingual development in a male child in Hong Kong named Leo for 18 months from 1.5 to 3 years old.

In Leo’s case, his family initially adopted a strict “one parent-one language” practice in which the father and the grandmother addressed the child in Mandarin and the mother in Cantonese. After Leo turned one, his mother began to interact with him in English and Cantonese on alternate days in a “one day-one language” pattern. A Filipino domestic helper joined the family when Leo was two years old and provided additional input in English. The mother kept a record of how much time and in what language Leo interacted with his primary input providers. The result shows that Leo had accumulated 54%, 26% and 20% of his total input in Mandarin, Cantonese and English respectively by the age of three.

To understand Leo’s language development over time, his conversations in three languages with respective input providers in daily routines and play activities were video-recorded for 30 minutes per language per month for 18 months. The videos were transcribed and tagged for part of speech and grammatical function following the conventions in CLAN (Computerised Language Analysis), and the transcripts have been uploaded to the Child Language Data Exchange System (CHILDES) for data sharing. The resulting language corpus contains a total of 44,846 utterances by Leo and his caretakers. Mean length of utterance in words (MLUw) was used to index grammatical complexity in both the adults and the children. Dr Mai also adopted the moving-average type/token ratio (MATTR) algorithm to measure lexical diversity. Speech data from 12 monolingual toddlers learning Mandarin, Cantonese and English in mainland China, Hong Kong and the UK respectively were chosen as the monolingual baselines of the three relevant languages and analysed in the same way to compare with Leo’s performance. In addition to the speech data in Leo Corpus, Leo also completed three standardised vocabulary tests at three years one month in order to compare his receptive vocabulary size in each language with monolingual norming samples in Beijing, Hong Kong and the US.

The Corpus and vocabulary tests results show that Leo demonstrated monolingual-like performance in both receptive and productive vocabulary in Mandarin, thanks to the rich input in Mandarin (54%) Leo heard from his father and grandmother. Although Leo received considerably less input in Cantonese (26%), his vocabulary and grammatical development in Cantonese was comparable with, and in some areas even better than monolingual Cantonese children in Hong Kong. His unexpectedly advanced performance in Cantonese may be explained by the similarity shared between Cantonese and Mandarin, leading to substantial positive transfer from Mandarin to Cantonese. On the other hand, Leo was able to produce full English sentences and meet monolingual standards in receptive vocabulary in English, although his English sentences were shorter and his words were less diverse than English monolingual children in the UK. This is remarkable because his English input accounted for only 20% of his total language input and it was mainly from non-native speakers of English (mother and helper). Leo’s achievement shows that even a very small amount of input in the third language can trigger acquisition in both lexical and grammatical domains at this very early stage of language development.

The Leo Corpus is the first and only open-access longitudinal trilingual corpus with child utterances and caretaker input from all three target languages systematically recorded for an extended period of time. It is one of the pilot studies for two on-going larger-scale studies on early trilingual development in Hong Kong and Guangzhou (GRF, 2021-2023)* and caretaker proficiency in English in mothers and helpers in Hong Kong (ECS, 2023-2024)**, led by Dr Mai. Leo’s case demonstrates that productive trilingual and monolingual-like performance in several important developmental domains are achievable in early childhood. It is also evident that the practice of “one day-one language” and “one parent-one language” are effective ways to turn multilingual resources of the child’s caretakers into quality language input that supports language development.